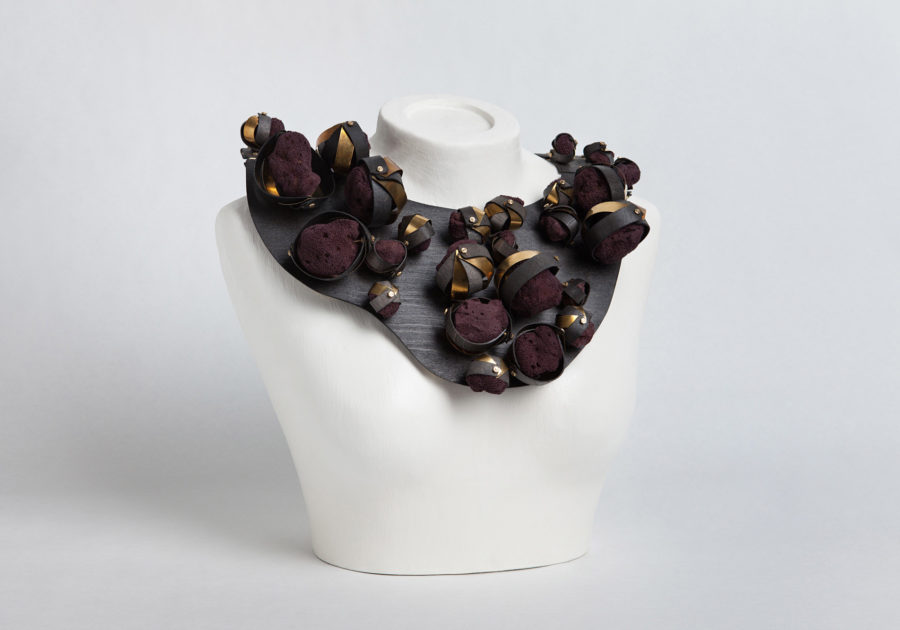 – september 2007-september 2010: I worked at costume jewelry workshop Artematta in Trieste, focusing on glass jewelry.
– september 2010-march 2011: I carried out a two-day weekly internship at ENVELOPE srl in Treviso, Italy, a clothing design studio specialized in denim.
– january 2011-september 2013: with a colleague I set up a label called THE COMPLOTTO: a line of trendy accessories (mainly brooches and necklaces) in MDF (medium density fiberboard), computer-designed and laser-cut.
– june 2012-september 2014: I set up my own workshop and launched my own jewelryline range calling it COLLANEvrosi.
– november 2013: I opened an atelier, shared with a photographer and a graphic designer. The space works as a studio and showroom.

– september2015: I won the HOMI MAKER DESIGN AWARD.
– september 2015: my work was shown at CONVIVIO/ TYPOS 2015, a collective exibition in Trieste.
– agoust 2016: NOT JUST A LABEL invited me to exhibit my collections at BACK SHEEP, a selection of designers from the NJAL community that the scouting team have identified as being especially innovative, pioneering and striking in their work.
– january 2017: I was selected by Artigianal Intelligence to exhibit at A.I. Studiò at AltaRoma Fashion Week, Rome.
– may 2017: I was selected by AUTOR to exhibit at Autor Fair 2017.
– august 2017: I was selected by Myday-byday gallery in Rome for a promotion shipservice dedicated to contemporary jewelry artists.
– october 2017: the Interni design magazine dedicated page 110 to my latest collection
– march 2018: I was introduced by MuDeFri (Friuli Venezia Giulia design museum) in the exhibition on the census of the women designers of Friuli Venezia Giulia.
– 3-10 march 2018: my works were shown at the collective exhibition WOMEN DESIGNER IN FVG at the Tina Modotti gallery in Udine during the Udine deign week.
– april 2018: I was selected by Adornment – Curating Contemporary Art Jewery to show at the exibition project No Matter Matters on the occasion of Milan Design Week 2018.
– june 2018: the Benchpeg online magazine dedicated an article to my Sea Bed collection.
– november 2018: I was selected by ESH Gallery to show at the exibition Walking Treasures III in MIlan.
– march 2019: some of my jewels have been published in issue 9 of the AF Magazine.
– june 2019:  I was selected by SHOWCASE ROMA to exhibit at SHOWCASE during AltaRoma fashion week in Rome.
– july 2019: I was selected by COLLECTIVA Gallery to show at the international exibition COLLECTIVA MEETING in Portugal.
– june 2020: I was selected by Alice Floriano Gallery to exibit at the virtual exibition MASK.
– september 2020: I was selected by Artigianato E Palazzo to exibit at Blogs And Crafts selection during the seventh edition of Artigianato e Palazzo in Giardino Corsini, Florence.